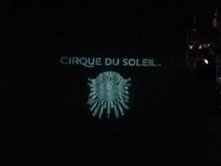 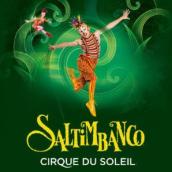 Arena about two weeks ago. As usual, they were amazing! The live music was awesome too. I have seen two shows of theirs in the past, and I can say that Saltimbanco is so much more entertaining than Alegria, which we saw in Singapore. It doesn’t measure up, however, to their Las Vegas show Mystere.

Danae was most especially entertained and got inspired to be in the circus. Noelle decided to take a nap during a fourth of the show. It was their first time. We certainly oohed, aahed and laughed a lot. Then we got a taste of some flood in the parking lot as the rain poured. We managed to stay dry when the unnamed southwest monsoon hit that week, but my Chucks, socks, feet and jeans weren’t spared that night haha.

Some thoughts on the show. The TRUST they had for each other was extraordinary. They leaped into the air, back flipping and somersaulting, absolutely certain that the spotters would catch them WHENEVER and WHEREVER they landed.

There was a part where a girl was on a swing high up in the air. For the first part of her routine, she had no harness on. The spotters below her had a cushion, ready to catch her if something went wrong. They did not look down, not even for a second. They looked up at the girl until she finished. Their eyes never left her until she put on her harness and started swinging, doing more stunts. The girl was assured of her safety, while the spotters made sure she was safe.

It reminds me so much of God and how we can trust that He is always with us as we move, upholding us and giving us the grace we need to do even the impossible. We can absolutely trust Him to catch us when we make mistakes and fall. He meets us whenever and wherever our own faith fails us. His eyes never, not even for a second, leave us. He promises never to leave nor forsake us. More than doing a job, GOD LOVES and VALUES US. When He makes promises to us, He keeps them.

During one of the leaping routines where they would be catapulted, landing either on the cushion or another person, the final person who was catapulted into the air to somersault did not correctly land on the chair that was meters off the ground. We were all surprised and waited in anticipation as she tried it again. When she did it, everyone clapped and cheered for her.

We all, even the best among us, make MISTAKES. When we do make mistakes, it’s not the end of the world. We can pick ourselves up and try again. I realize that most people (not all) won’t boo you or kick you down more to show you what a failure you are. They actually ROOT for you and even CHEER for you when you overcome! I am grateful for the people around me who see my flaws, weaknesses and failures, yet love me, pray for me, encourage me, and rejoice with me.

The circus is made up of hundreds of people, each with a different role and responsibility. Besides the people in the acts themselves, which are many, there’s the band, the camera men who sit beside the lights way above the stage, the light men, the sound tech, assistants, stage director and probably more that I can’t think of. Not all get the recognition they deserve, but they each do their part and they all work together towards one goal: to give us a great show.

It looks a lot like church. We are made up of many people. Besides the pastors and staff, the unsung heroes are the

VICTORY GROUP LEADERS and VOLUNTEERS. Many may not always get the recognition or appreciation that they deserve, but we each do our part and we all work together in UNITY towards one goal: TO HONOR GOD AND MAKE DISCIPLES.