So this school year was Noelle’s first time to complete a year in regular school. A few years back, she started out Nursery quite well in the pre-school that Danae attended, but after Christmas break, she did not want to go back anymore. She had some trauma from a little boy who found her cute (go figure, haha). I knew she was serious because during their Christmas party, she cried instantly when she saw the boy. She cried so much that she refused to join her class presentation. I guess it stuck to her. She was surprised that break was over and that school was back on. So instead of forcing her, I let her stay home, since we were homeschooling Danae then.

We homeschooled Danae from 1st to 3rd grade, to regroup, and strengthen or rebuild her foundations. We agreed to put Danae in regular school last year after much prayer and deliberation. She was raring to go to Studio 360 (now The Sycamore). We knew we were placing her in a quality, non-traditional, small, Christian school. We knew that character is also the school’s priority, not just academics. We knew she would have good friends and teachers around her. We felt secure partnering with the school in educating her. And most importantly, we were convinced that it was/is best for her. Danae learned and grew so much in school. And she loved it so much that it was no surprise that Noelle followed suit.

The girls recently had their moving up day. We bought new dresses, shoes, and masks (thank you Huang family) because the theme was a masquerade ball. We had their hair done. They put their own makeup (amazing). We knew they were going to have song and dance presentations, most of which I did not get to see as I had to run after and entertain Gianna. What we didn’t expect was Noelle’s numerous awards!

We don’t put pressure on our kids to have awards (but of course now, they’re both more motivated to get them). We do urge them to do their best, and we always remind them that good grades are good but their character is still most important. Their classes are also so small (just 3 kids in her level), we really didn’t think about awards. But how proud were we learning Noelle got the awards for having the highest grades in English, Math, History and Geography, and Science! I mean we were aware that her grades were really high but we didnt expect hers to be the highest. Not a surprise that she didn’t get the Filipino one haha, though her grades are still up there. She also got a character award for creativity in the performing arts, and I guess the highest award called the Sycamore award!

Noelle was so happy!!!! I got a little teary as they enumerated her academic awards haha, when the 2nd graders were acknowledged and awarded. Danae cried when Noelle was later on awarded the Sycamore award. Gianna was just happy to finally get on that stage when we went up for picture taking hahaha (she already disrupted the awarding of one secondary student!). King was beaming. Noelle made us all so proud! 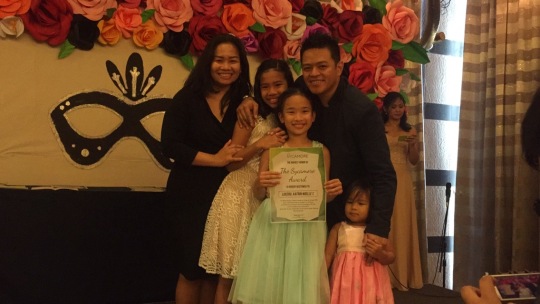 We are behind you, Noelle! 🙂

This girl…. Sometimes she appears as if she’s not listening. Sometimes she forgets, or deliberately fails to tell us that she has homework despite my nagging. But when we review for exams, she knows her stuff. Very seldom does she ask me for help with homework (this is their training in the Sycamore). She constantly tells me things I do not know. Her teachers always give us good reports about her. The awards were a wonderful surprise. How encouraging to know also that we made a good decision putting her in her school.

I did ask her, after all the excitement, if she thanked Jesus for all her awards. She shook her head. It was a good opportunity to remind her that though she is awesome, none of it would be possible without Jesus. 🙂

For I can do everything through Christ, who gives me strength. Philippians 4:3

For apart from me you can do nothing. John 15:5b