One of my daughters has been interested in acting ever since she was little, but we didn’t have the chance or time to commit to any workshops. When Homeschool@Alabang opened in June last year, offering a Musical Theater class that fit into our girls’ regular school schedule, we enrolled both girls since my other daughter expressed interest as well. My friend May of FullyHousewifed encouraged me that the class is good, especially with Ms. Anamarie Quirino teaching it.

It was extra work and extra expense for us, but we went for it. There were times that they both didn’t want to attend the class because they were tired, times they had to skip it because of sickness or exams, times they wanted to quit. But we are all so glad that we PUSHED ourselves to finish what we started, to honor our COMMITMENT. I would have also easily agreed to them giving it up, but King reminded us that he had already paid for the entire year’s fees. What a waste of time, energy, resources, and OPPORTUNITY it would have been if we just quit, when we’d already invested 6 months of our lives and their show was only a few months away. 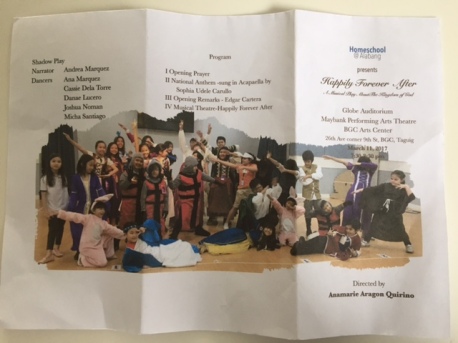 The play was entitled Happily Forever After (A Musical Play About the Kingdom of God), held at Maybank Performing Arts Theater in the BGC Arts Center.

The result was wonderful! Danae’s call time was 10am because she was part of the Shadow Play team. They had a part in Homeschool@Valle Verde’s show at 1:30pm. King brought her since King had work in the area, and my friends (moms of the other girls) took charge of her while I couldn’t be there with her. Noelle’s call time was at 3pm, along with everyone else. King came back for us at home and we all went in time for Noelle’s call time. With all the time and work they put in that day, I did not hear a single complaint!!! They both enjoyed themselves so much. They loved it! I think being in a real theater with real dressing rooms added to the excitement. When they heard “company call!” they bolted out of the dressing room while I was in the middle of braiding Noelle’s hair! They were so busy and excited about their rehearsals, makeup, costumes, and about delivering an EXCELLENT performance. Not to mention the FRIENDSHIPS they built with new people, and the MEMORIES they created with their oldest friends. This was one for the books! 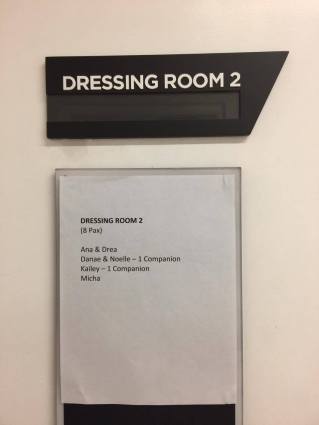 inside the dressing room, after the show 🙂

We are so proud of all the kids! They were all adorable. Kids with talent, who gave their BEST, whether their part was big or small. Kids who WORKED TOGETHER and displayed so much COURAGE! We’re grateful our girls got to be a part of it. The best bit — they got to SHARE THE GOSPEL through their play!

Our girls truly surprised and impressed me. I could never do what they did with much comfort, except maybe the dancing part. They didn’t have speaking lines, but their facial expressions, their acting chops, and their confidence??? They may look like me, but they’ve got their dad’s performing genes. For sure. And Gianna? She mentioned a couple of times that she wanted to go down and dance as well. Her words seeing Noelle right after the play — “Noelle, I like your make up!” She’s two, and I don’t think she has a problem being on stage either. 🙂

the opening scene — our trumpeteers Danae, Ana and Cassie! 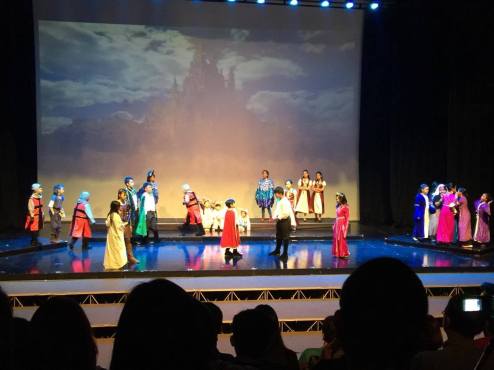 Danae in red and white (rightmost, upstage), and Noelle in purple (rightmost part of the image) 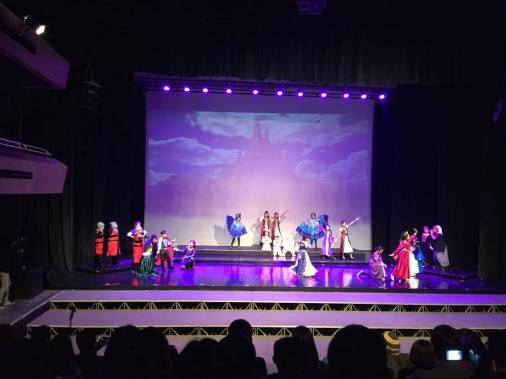 The shadow play – Danae handled the head of the dragon. This was a beautiful depiction of Jesus’ death and His victory over death.

The girls of the shadow play crew 🙂 Thanks for the photo, tita Trickee 🙂 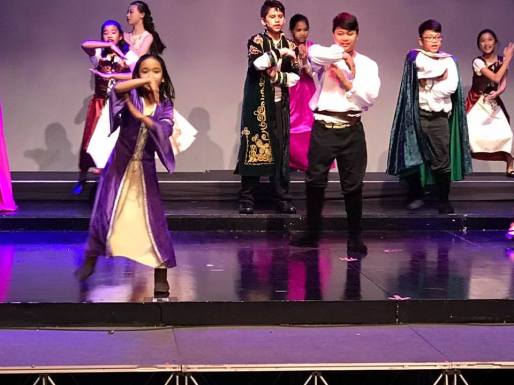 Danae and Noelle in sync! at least in this shot 🙂 Thanks tita Michelle 🙂

With their talented director, Anamarie Quirino 🙂

Wowo, Wowas and ate Ella came to support! Wish Wowo Vic were alive to see this. Thank you, family! 🙂

Commit your work to the Lord, and your plans will be established. Proverbs 16:3