Facebook reminded me this week of something I said two years ago. 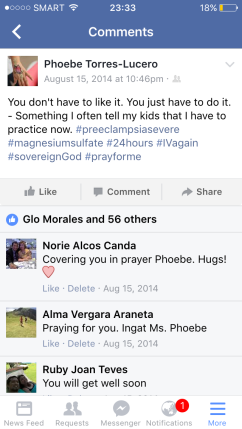 Actually, King was the first one to remind me. He wished me a happy birthday on Gianna’s birthday, and said he remembers everything. I just smiled. I honestly did not think of it. But as I was watching a show the other day, I suddenly cried seeing the daughter hug her mom so tightly, thankful that her mom is alive. You see, not to sound overdramatic, well okay maybe a little, I almost died.

I was scheduled for a c-section on August 12th, so I had to be admitted the day before. I don’t know why, but through the difficult pregnancy, I had so much fear. I feared pain. I don’t know if God was already warning me about things to come, but I struggled with it. I would cry because I was afraid of the pain I MIGHT experience. I’d given birth to Danae normally — that was painful even with epidural. I’d given birth to Noelle via emergency c-section — also had epidural and recovery was painful. You would think after two births, I’d be more confident. But no, I was seriously afraid.

August 11th, my spirits were high. King, the kids, and I were excited to be at the hospital. I wanted the girls to be with us overnight so they could meet Gianna right after she came out. To keep with tradition since Danae was also there in the hospital when Noelle was born. 🙂  I tested positive for GBS (Group B Strep) and so I needed to be given antibiotics intravenously 24hrs before my c-section. I was told to shower with an antiseptic and wear the hospital gown, so they could test my skin for a reaction (or non) to the antibiotic and also insert the IV. I was ready. Bracing myself, but ready. The nurse inserted the needle….

and I WAILED IN PAIN. I cried so loudly that my girls cried with me. I had never experienced that before in my 3 previous hospitalizations. That was just the beginning. To make the story shorter, almost everything I went through was painful. Plus I guess I was super emotional. King was not allowed to stay with me in the labor room and I had no phone, so through my tears I occupied myself with singing my first favorite worship song, Great is the Lord and Most Worthy of Praise.

I sang it even while they were getting Gianna out, and King was by my head. There was no pain at that point but I had difficulty breathing. That was normal, I was told, because of the spinal anaesthesia they gave me. It was quite different from the epidural I’ve had in the past. I kept thinking, I wanna hear the baby. I’ll be okay when I hear and see her. When she was out — her skin so fair like Noelle, chubby and chinky like Noelle, and she cried softly (like neither sister hahaha) — I was relieved and happy. I even made sure my doctor fixed my fallopian tubes. She assured me that she was ligating me, haha. They put Gianna on me so she could latch, and we could have some skin-to-skin contact. ❤

They brought me to the recovery room, and they would not bring me and Gianna to my room because my blood pressure was high. I kept looking at the monitor and I would see it at 160 over something. I thought that was odd because with my first two, my blood pressure normalized as soon as I gave birth. I was in there by 2:30. When Gianna cried, we would try to breastfeed. I tried to sleep and relax. By 8 or 9pm, I asked the nurse if she could bring Gianna out to meet her sisters. She obliged and I thank God that happened because the girls did not see her again till she got out of the NICU. More on her birth here.

I was brought to my room around 11pm. They gave me meds for my BP and monitored my urine for 24 hrs. When they removed the catheter, I was able to stand up and move. I would get dizzy and have a hard time breathing, but surprisingly my wound and stomach muscles did not hurt much. On the 15th, I was given the go to be discharged. My heplock was removed. I had no dextrose anymore by the 14th actually, but the thing was still in my vein till they removed it the next day. So you know, I thought I was fine and healthy. I did keep asking about my swollen ankles and legs. My edema would usually disappear as soon as the baby came out. I thought something was not right, but they kept telling me it was normal. We opted to keep the room and wait till Gianna was finished with her antibiotics in the NICU.

Not long after that, a doctor came into my room and told me that I had pre-eclampsia. I was so annoyed that I asked her why she’s saying pre-eclampsia when I’ve already given birth. Isn’t it supposed to be post eclampsia? Haha. It’s called pre-eclampsia because it is a condition before eclampsia. Eclampsia is high blood pressure and seizures in pregnant women. The usual cure for that is to give birth. Mine was post partum pre-eclampsia, meaning after I’ve given birth. She told me I would need magnesium sulfate for 24 hours, I got more upset. I told the attending doctor that I did not want to be IVed again. I said I was done. In my head, I was thinking that they were mistaken. Not after Gianna, needing to be in the NICU. No way. It was just too much. They said they would just relay it to my OB-GYN.

My lovely doctor, Dra Guinto, came into my room early that evening, and pleaded with me, not just as my doctor but as my friend (her words), to get the treatment. I actually had pre-eclampsia severe — severe because I had more than 3 symptoms of pre-eclampsia. It was good that we found out while I was still in hospital, because it would have been more dangerous undetected at home. There are too many complications if we don’t treat it — seizures and nerve damage. I cried because I did not want to do it. I did not want another IV insertion. I did not want additional pain — I was told it was going to feel hot in my body. I did not want a catheter. Hearing it straight from my doctor (and because she allowed me to not wear a catheter) and with King encouraging me to just obey, I eventually agreed. Thank God my children weren’t there. They were still with my in-laws.

That night, they brought me to the High Risk Pregnancy Unit. I was already in the groove of going down to the NICU to feed Gianna each time she needed feeding, but I couldn’t go to her again for 24 hours. I was emotional, eyes swollen from all the crying. Praise God the IV didn’t hurt and I did not feel the heat in my body. But in my heart, I kept asking the Lord to keep me alive. I did not want to let my girls feel abandoned. I did not want them to be at a loss, devastated by news of me dead. We had not seen each other at that point for 4 days. Imagine thinking everything’s fine and then your mom is suddenly gone. I did not want them to have to go through that. I was afraid that they’d get angry with God. I did not want Gianna to grow up without a mom. She’s too little. Writing about it still gets me emotional. Kawawa naman ang mga anak ko, I told God. I did not want to die yet. King did not show me, but he was also concerned. I guess he prayed like he never prayed before.

I was at the same time, concerned for Gianna because she was in the NICU. I kept hearing in my head, or was it in a song or I saw it in one of the movies, “the Lord gave, and the Lord has taken away; blessed be the name of the Lord.” I told God that I don’t think I was ready to say that if He took Gianna away. Oh the tears!

After 24 hours, even my doctor was stumped. My blood pressure was still high. I asked her what might happen and she said my heart could fail from all the pumping it’s doing. I think that’s when she talked to King outside and they both decided to get me out of that unit. The place was causing me stress. I could not wait to get out and hold Gianna. We moved to a small room and by the grace of God, they released Gianna around the same time too. I got to see her and be with her again. My blood pressure went down, though still elevated. And by next morning, I was deemed healthy enough to be discharged — for real. Whew!

Later that month, I realized how much worse it could have all turned out. I was still having high blood pressure, dizzy spells, and an overall sick feeling. My friend whose son was in the NICU for 2 months, told me about a baby also in the NICU whose mom was in a coma. When I asked why, I learned that she was in A COMA BECAUSE OF PRE-ECLAMPSIA. Days or maybe weeks later, she was gone. It just became so real. My fears were not baseless at all! I cried then, feeling bad for that baby and her dad and THANKING GOD THAT I WAS ALIVE. I seriously could have died too soon. Thank God my doctor insisted on treatment and King urged me to do it. Otherwise, I would be in heaven and that would be great for me, but not so great for my family.

I thank God for my life! Despite that health scare and though I am still taking medication for high blood pressure, I am still here. God chose to not leave my children motherless. He chose to give King and I, the girls and I, our whole family more years together.

Exactly two years ago, we brought Gianna home from the hospital.

Now she’s 2, and we are both alive and well. God is sovereign and God is good. And King is right. It is also my birthday. We are deeply grateful. ❤

Give thanks to the LORD, for he is good; his love endures forever. Psalm 107:1

I make known the end from the beginning, from ancient times, what is still to come. I say, ‘My purpose will stand, and I will do all that I please.’ Isaiah 46:10

The Lord does whatever pleases him
throughout all heaven and earth,
and on the seas and in their depths. Psalm 135:6

The LORD is good to all; he has compassion on all he has made. Psalm 145:9

3 thoughts on “Happy birthday Gianna (and me too?)”