It was a busy time in our household last month because we hosted my cousin and her family. It was my nephews’ and niece’s first time in Manila ever, as they reside in Cebu and San Carlos city, Negros Occidental. So about two months ago, their mom and I planned some activities for them to make it a memorable visit. One of the places we decided on was Manila Ocean Park (we were hoping to drop by Manila Zoo and Luneta Park too but failed to).

My family and I have been to Manila Ocean Park before when Danae’s pre-school had their field trip there, but that was more than  five years ago I believe. I did enjoy the oceanarium and the jellies, Danae kicked and giggled at the fish spa, and the only other thing I remember about the place was their mermaid show (because I found it very funny hahaha…sorry). Well, that and the facts that you pay for every attraction you want to enter and that one ticket equals one entry only. You choose which attractions you want and pay accordingly at the ticket counter. You enter each attraction, you exit, and there’s no going back unless you have another ticket. I find that odd because usually, you pay an entrance fee and are free to go in and out of whatever area you want to check out. Anyway, I was up for new, fun memories that my kids would make with their cousins. We searched online and discovered the summer promo! We went for the 13 attractions, which is really 11 because Trails to Antarctica has 2 parts and the other so-called attraction is a souvenir (go figure). Instead of it costing 4,350 Philippine pesos per head, it was Php990 per head. And when we got there, there was a promo on top of that! If you’re a group of 7, you could get the Php990-deal for Php890 per head. So we paid Php890 for 7 of us and then Php990 for the rest, except of course the baby. She, and anyone under 2 feet, is free.

The twins, my two other nieces, met us there. We arrived right before noon, and we were able to visit the Birds of Prey Kingdom first, and then catch the Bird Show at 1:15. There weren’t many people yet, and two of my nieces were chosen as volunteers for the show! Danae volunteered but kids were not allowed. That was a fun experience haha.

We saw a shark and touched a huge sting ray at the Sharks and Rays Dry Encounter (we forgot to buy our photo — cameras not allowed in this area) before we had our late lunch at North Park (there are restaurants inside, even a lunch buffet). We caught the 3pm Sea Lion Show (there was also a 5pm), in the same stadium as the bird show. We noticed a lot more people filling up the seats. We went straight to Trails to Antarctica. There was a snow village, which according to them was so tiny, it was literally just for a photo op. I did not go in because Gianna was not allowed due to the extreme cold I guess. I did get the kids to feed the penguins! It was Php300 for 2 people, but you could add Php100 for an extra person. That was my favorite part — that they not only got to see them, they got to be in the enclosure with them and feed them (touching was not allowed). They had a nice hallway with interactive stuff about Antarctica, which led to the fish spa and the Back of the House. 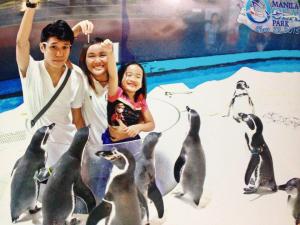 They all went into the spa to have a relaxing (and ticklish) 30 minutes with little fish eating the dead skin off their feet. And then right by it was the the Back of the House, where you could see what they do at the back of the house. Near the spa was also the Aquanaut and Glass Bottom Boat Ride, but we did not avail of those.

We got to the Penguin Talk Show right in time, around 530pm, where there is this funny penguin (cartoon and voice) talking to the audience. It was a treat for us since he singled out my girls and one of their cousins. My girls enjoyed that greatly. The Jellies Exhibit was nearby and it was our last chance at 6:15pm to visit it before it closed, so we went thru it quickly so we could make it in time for the Symphonies Show.

The stadium was packed! I didn’t expect much from the fountain show, but I enjoyed that a lot. It wasn’t hot anymore and I was comfortably (though my chair was broken) seated. There was music, fire, water. At the climax of a couple of songs, the water shot up extremely high and sprayed practically everybody as it came down. Everyone got a kick out of that one. There were fireworks at the end too.

We did the Oceanarium last since we could still catch the last entry time at 7:15pm. We were excited about all the fish! We were literally the last ones there. My phone died right about that time, and as much as I wanted to take more photos, I no longer could.

Was it worth it?