It was the first week of July when I stumbled upon an article saying that one of the University of the Philippines’ most popular eateries was going to close. Apparently after around 30 years in business beside the Main Library, Beach House Canteen was being evicted because they were too close to the drainage, making it unsafe for the students to eat there. Okay, but after decades?! I never heard of anyone die from their delicious barbecue (with red egg on the side hehe). I used to frequent Beach House when I was a college freshman in the university, incidentally exactly 20 years ago, and I just couldn’t bear not eating there again one last time. I thought it was also a good opportunity to have their first field trip for homeschool — let the girls see U.P. and start brainwashing them about THEIR future university (insert evil laugh here).

Thank God that I read the article I think on a Friday, King’s rest day was (always is) on a Monday, and the canteen was closing on Wednesday. The timing was perfect. We left home around 10 on July 7, and got to U.P. just in time for lunch. There was a line at Beach House, which I thought was usual, but after ten minutes of no movement, I started to wonder. I thought it was because there were too many customers and they were just trying to catch up on cooking, but after 30 minutes of waiting, we got a confirmation that they were out of their famous barbecue — the very thing I went there for! Apparently many people were buying barbecues by the dozen to bring home, as opposed to them just buying a couple for their lunch. Bummer.

I didn’t get my Beach House fix, but I had also been telling King for the longest time to take me to Rodic’s so I could eat their yummy Tapsilog (beef flakes, fried rice, and egg). We passed by the library first, and the kind guard let us step inside the lobby for a quick look. The girls were amazed at its size. They actually wanted to read some books, like they would in Fully Booked haha. Danae even told me that I should have brought my ID so we could get further in.

Then off we went to the Shopping Center, where Rodic’s is (and has been for the last 60 years I’m guessing?). The girls got a taste of souvenir shopping in SC (too bad there were no kiddie shirts) and they got to use their bathroom haha, which they weren’t too thrilled about.

We visited the Alumni Center next. I wanted to check if the old bowling alley was still there because bowling was a Phys Ed class I took during one summer, and to my surprise it still was! Duck pins, manual system, no air conditioner, and way inexpensive — old school. We decided to let the girls play one game. It was their first time to play duck pins. I don’t think there are any more duck pin bowling alleys around, so it was a treat. 🙂 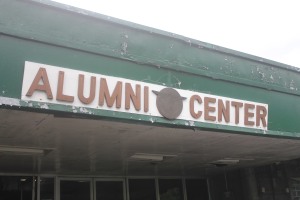 Danae was interested in other P.E. subjects like archery, so we tried to see if there were any activities in the gym that day. They looked like they were renovating the place, but the girls were able to play outside. It looked like a playground but I bet it’s for one of the P.E. subjects, like maybe fitness or weight lifting or the like. Hey, U.P. has Stretching for P.E. so it’s not far-fetched. 🙂

Our last stop was the oblation statue, in front of the administration building called Quezon Hall, but we also passed by AS (arts & sciences/Palma Hall) and my college building Alfonso Hall (college of Home Economics). My favorite part of my college was what they used to call CDC or Child Development Center, if I’m not mistaken, because that’s where the pre-schoolers are. Yes, even then, I was fond of kids. Too bad I didn’t finish my course though (Family Life & Child Development), and didn’t get my degree in U.P.

I love the University of the Philippines-Diliman. I love the campus and I have fond memories there. I am excited to see if this is where my children will end up after high school. We are open to other universities (well, maybe a little haha) where they will get the best education for whatever course they will take. As of now, Danae already says U.P. will be her school. Music to my ears, haha. But King and I are committed to support our children and encourage them towards their God-given destinies, wherever or whatever that may be. Easier said than done, and I thank God we still have a decade to prepare. 🙂