It took me a month of trying to fight my puking urges before I finally accepted that I should just LET IT GO. Yes, Frozen’s song meant something different to me then, haha. I hated throwing up, but it somehow relieved my painful tummy. So I conceded. I tried some food from time to time, just to check what I could take, because I was sooooo sick of crackers. I finally found some that I could eat and be satisfied with — mung beans and dried fish with rice! To us Filipinos, munggo and tuyo/danggit! How ironic that the smelliest of all fish was what I could eat. That was my meal twice a day for more than a month. My tummy settlers were soda, nuts, and chips. I still experienced the same nausea, bloatedness, aversion to smells (and did I mention aversion to food on tv?) and vomiting, but at least I had some real food to eat.

It was around that time, the second week of February, that I psyched myself to finally visit my OB-GYN. It was not without a lot of crying days before, as I was dreading the smells I could possibly encounter. I was seriously afraid, and I felt trapped. I did not want to be paralyzed by my fear, but I was. I was sure I would vomit, and I definitely didn’t want to do that in public. There’s nothing pretty about vomiting, even if I had the best excuse to do it. It’s gross, loud, uncomfortable, and painful.

I made sure I threw up before I left home (twice), and I equipped myself with some crackers and a small jar of vapor rub to help mask other smells. It was the first time I left the house successfully (we tried going to a nearby commercial area a few days before and I was too nauseated to get out of the car). We found out that I was 3 months and 4 days pregnant. Quite late for a first check up, but I had been drinking folic acid and calcium by end of  December, though irregularly. Yes, you guessed it, they were hard for me to swallow at times. I was prescribed the usual prenatal meds, but the ultrasound showed that I was having contractions. My doctor gave me additional ones to secure the baby in my womb. I realized that it was a blessing that I had just been staying home that whole time. I had not endangered myself or the baby.

WE SAW THE BABY AND MY HEART SMILED for the first time in a long while. I was happy to know that even with my troubles, he (or she) was a-okay.

I felt quite accomplished after that. That didn’t encourage me to get out of the house more though. I was still trapped by my fear, and the farthest I would go was in our front yard to watch the girls bike. Of course smells of cooking from neighbors’ houses bothered me too. My next trips out were only for a doctor’s visit and a short side trip to the mall, a dental appointment, and a trip to the bookstore.

Things were getting a tad better, plus thankfully our former stay-in helper came back, but I was still feeling down a lot. There were days that I cried practically all day, and there were days that I was fine. Then came the 3 or 4 consecutive days that I was just in anguish and I cried to God. I was like a crazy person, pleading for grace and mercy one minute and then blaming God for what I was going through the next. And then the inevitable came sometime in mid March — MY HEART SURRENDERING TO THE LORD. I cried, prayed, repented for my anger, ungratefulness, and joylessness, declared His love and goodness, literally lifted my arms in surrender to His will. I was done. I gave up being angry and finally allowed Him to take over.

It was not a quick change in my disposition, but peace and joy slowly came back into my heart. I was able to see the good, even though I was still vomiting every morning. Though I chose to stay home still, I was able to BE WITH my kids, play with them, and even resume homeschooling. My appetite was returning and my taste buds were normalizing. I said goodbye to mung beans and dried fish! I still had problems with smell and I still couldn’t eat all kinds of food, but I was better. I was even able to watch Captain America to support a friend’s fundraiser. I did get quite dizzy before and after the movie, but that was a breakthrough. You don’t know how happy it made my husband that I was out with him. I also started feeling the baby move that week!

The trip that followed was my doctor’s appointment this month, with some grocery shopping and a visit to our church. It was good to be in a supermarket after 3 months, though King did most of the picking and handling especially of the meats, while I ate chips to get rid of the nausea. And it was great to see friends I had not seen since the last Sunday of 2013. I believe the next day was the last day I threw up, the day I watched Rio 2 with my family. My daughters were so happy, seeing that I was “healed.” 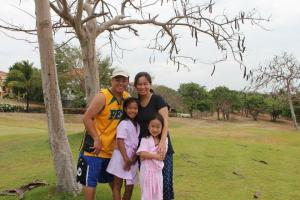 By holy week, I was able to go on vacation with the church staff and actually enjoy it! I was able to eat. I got the most exercise I’ve gotten since I got pregnant, walking up and down steps and swimming laps. I enjoyed the beach and swam with my kids. I got tired, but not exhausted. Since then, I’d been able to go out, sit at restaurants and endure the smells without gagging! It may not be a big deal to anyone else, but it’s a huge deal for me. Finally, MY MIRACLE IS HERE! Last Easter Sunday was the first time I attended church service since 2013 ended!

Yes, I still get dizzy, I still gag at smells sometimes, I get easily tired, and there are still certain food I can’t stand, but I THANK THE LORD that He has given me this breakthrough. I seriously thought I was going to suffer the tummy aches and vomiting the entire 9 months! And not only am I feeling better, we were able to finish all of Danae’s requirements for her major subjects! Thanks to Teacher Sybil for helping me and the girls, in homeschooling and other matters. All I need to do now is make sure she finishes her computer subject which her dad is in charge of, to fix her portfolio, and to submit her grades. We are quite delayed, but thank God for our understanding school principal.

Indeed I can say that THE LORD IS GOOD. Even though I was so ungrateful and unfaithful to Him, He remained faithful. He was understanding and patient with me. Though many times I felt that He was silent, He gave me people who loved me, stood by me, and helped me sort through my craziness — my patient husband King, my accommodating girls Danae and Noelle, my friend, constant chat mate and shock absorber May, and faithful friends who keep praying for me, are my heroes.

I was aware that God was teaching me something, that it was another stepping out of my comfort zone (boy, was it ever), another push to grow, but my pain and hardship blinded me. I focused more on the bad, whining and crying, rather than focusing on the good. Hormones did play a big role, sure, but I know God wanted me to go through it to bring me to a place of TRUE SURRENDER. My prayers were sincere but my emotions tainted them with pride and unbelief.

It wasn’t until I surrendered that the veil was slowly lifted. God is a personal God. And this is the way He has always been with me — BEFORE HE CHANGES MY SITUATION, HE FIRST CHANGES MY HEART. Everything that He allowed to happen led to a heart change, and my situation began getting better and better. I know it’s an ordinary experience for some and they take it in stride. This was a first for me. My first two pregnancies were not this hard, and I was never this miserable. It was not right to have such little joy and I could not figure it out, hence all my frustration and anguish. I may not understand all of it, but I do understand that God is good and all His plans are purposeful. He loves me enough to want me to grow, and not just coast along. His grace IS sufficient and He is present, whether I feel it or not. He wants me to be free from anger, fear, and pride. He wants me to live fully with peace and joy, not repeating vicious cycle after vicious cycle. And the only way is by coming to Him and surrendering to Him, leaving it all at His feet. FREEDOM, PEACE AND JOY COMES WITH SURRENDER. 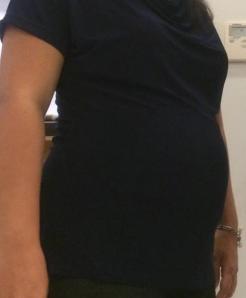 I will be 6 months pregnant in about a week! I am healthy, at peace, and excited. My girls are busy with their summer activities and I can be their mommy/driver/assistant again. King is also busy with work/ministry and we were able to tag along to the youth camp last week. The baby is healthy, and by next month, we hope to know and then share the much anticipated reveal of his/her gender! We are all doing well and I can’t thank the Lord enough. 🙂

Humble yourselves, therefore, under God’s mighty hand, that he may lift you up in due time. Cast all your anxiety on him because he cares for you. Be alert and of sober mind. Your enemy the devil prowls around like a roaring lion looking for someone to devour. Resist him, standing firm in the faith, because you know that the family of believers throughout the world is undergoing the same kind of sufferings. And the God of all grace, who called you to his eternal glory in Christ, after you have suffered a little while, will himself restore you and make you strong, firm and steadfast. 1 Peter 5:6-10

Give thanks to the LORD, for he is good; his love endures forever. Psalm 118:1

In my anguish I cried to the LORD, and he answered by setting me free. Psalm 118:5

Click here and here for the first two posts of this story.

2 thoughts on “The Surrender”