A group of Victory Alabang singles and I got together last week to respond to this ad to “adopt a day” in Villamor Airbase, and serve the Haiyan/Yolanda survivors who were coming to Manila. Honestly, when I posted it on our singles Facebook group, I didn’t know exactly what to do. I hadn’t figured it all out. I just wanted to gather people and be involved with helping the evacuees/survivors.

I am just grateful that the people who responded were the “right” people for the job. I believe they were looking for an opportunity to do more for our fellow countrymen. It was a long thread, but we were able to decide which day to go and choose who would be in charge of what. We decided to bring relief goods, packed meals, and to cook and serve hot noodle soup there for 200, at least 1 flight-full of people. We initially wanted to bring survivors home to their relatives in Manila, but we hesitated because we had transportation issues (i.e., number coding). I also, being a woman and not very good with directions, though willing, could not really commit to bringing them where they needed to go. I was concerned with my time because I would be leaving the girls at home — our helper would leave in the afternoon and King would be going on a debriefing in the evening due to his Tacloban trip. We decided that some of us would be food servers, food runners, marshals, and one would be a counsellor (he was the only one trained to do debriefing with traumatized victims), and immediately registered online.

I think we started talking online on Saturday, and had a meeting on Monday. Upon seeing all the goods we had asked from the church, which as mentioned in my previous blogs held relief operations when Haiyan/Yolanda hit, we realized that what we wanted to do was no easy task. Carrying one sack full of relief bags alone was already hard work, haha. We had around 30 sacks and 1 big box, plus boxes of noodles and bottled water! It was way more than what we thought we would be bringing. Loading, transporting, unloading quickly became an issue, especially since our target departure from my house was 6am on Wednesday because the shift we chose was 8am to 3pm. We were able to work it out though, thanks to our team, our guys in church, and a few friends. They were a huge help.

I love doing group “projects” especially when they’re for blessing people. I love the heart, the team work, the bonding. I enjoyed having some of our team at home on Tuesday night, doing prep work. I enjoyed seeing each one working towards the common goal of serving our country even in the small ways that we knew how. I loved getting to know them better, some of whom I have never talked to for more than five minutes. What an opportunity to make my small world bigger. Anyway, it was a big mess afterwards haha, but we had fun! The men had a good workout loading the sacks onto our rented jeepney. Most of us probably had at least 2 hours of sleep, except for one who came from work (imagine that?!), and after packing all our food, we left at 7am. 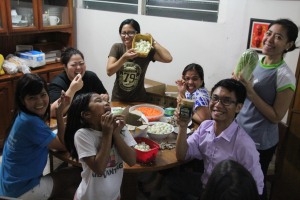 Two of our men, fixing our boxes of packed meals. This was after they loaded the sacks of goods onto the jeepney, Wednesday morning.

Our fully loaded jeepney! photo credit: Danae (she woke up early to help too.)

We were hurrying to get to Villamor Airbase by 730, but we couldn’t go too fast because our jeepney was fully loaded. We encountered all sorts of problems that day. From our jeep not being allowed to enter the airbase, to not being allowed to set up to cook food (though we did get confused, we cooperated and gave the “Ladies” our packed meals, noodles and water), to all our relief goods not being accepted anywhere in the airbase, to our jeep breaking down. Three of us spent a good chunk of our morning figuring things out, and I thank God for people like Maeriz and Ninoy who are always cool and calm, because when I was at my wit’s end, they pressed on. Ninoy, who was with the jeep and the goods outside the base, told me he didn’t know what to do anymore, but then minutes later texted me this:

“Kaya natin toh! Walang aayaw! (We can do this! Nobody give up!) There may be situations we cannot control, but let’s help hand in hand to *get it done! All for God’s glory!”

He made me smile. I was really encouraged. Maeriz was at that time trying to find someone who could help us carry and bring our goods from our broken down jeep to anywhere they would receive our goods, which she did! She was even willing, before that, to speak to the Colonel in charge of the whole relief operation herself! Thank God for the Pasay LGU who had a booth there, waiting for survivors to come so they could bring them to their area. Since there were none yet, they agreed to get our goods and bring them to Tent City, which served as temporary home for evacuees. It was inside the Villamor Airbase Elementary School. Our donations were in good hands, plus there was no hassle in giving all of it to them. They seemed to have greater need for them as well.

Transferring goods from our broken down jeep to Libreng Hatid-Pasay’s vehicle. We were so grateful! Ninoy, our jeepney driver Kuya Orly, and their driver Michael did the hard work.

Tent City. Temporary center for survivors who don’t have relatives in Manila. 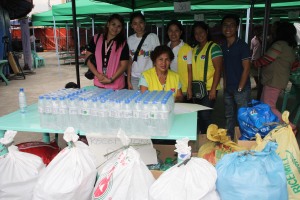 They were so grateful receiving all our goods. The lady in pink is Michelle, the one who accommodated us at Villamor airbase and helped us get our goods to this place. 🙂

Upon returning to the airbase, we joined the others in the Grandstand. We were told that we should eat while there were no flights coming in yet. Apparently there was 1 C130 plane full of people that they were able to serve while we were out. The other C130 planes were empty, and were used for loading goods. There were booths in the parking lot that served hot meals for anyone, and I mean anyone, who was hungry. Oplan Hatid was there. There were ambulances that were ready. There was a tent for medical aid, and a tent for kids! And in the Grandstand, on the highest level, there were hair cutting and massage services available for I believe anyone who needed them (though of course the survivors are priority).

The only shot I have of a C130, from outside the Grandstand. I was told not to take pictures of the air strip and especially of the survivors once inside, though nobody told me not to bring my camera in (it was hanging on my neck the whole time). I complied out of respect for the survivors. Believe me, I so wanted to take more pictures, haha. 🙂

The goods on the air strip, as background. Wanted to take more, but I felt I was already pushing it. 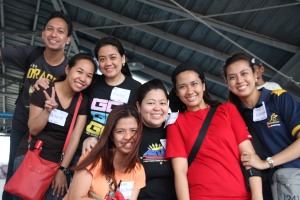 half of the team inside the grandstand!

most of our team — food servers, food runners and marshals waiting for the next C130. 🙂

All those people, well maybe most, were there for one thing — to make sure that our brothers and sisters who suffered so much from Haiyan/Yolanda were served. It was so emotional when I saw the people coming out of the C130, right before our shift ended. There were kids. There were elderly people on wheel chairs. One soldier was running with a wheelchair to another elderly woman near the plane. There were people on gurneys, who went straight to the ambulances waiting behind the Grandstand. We, the volunteers, cheered for them as they came. Our food service head, Mark, who was so patient and consistently active, instructed us to do so.

I was not anymore able to serve food to them because the shift rotated (yes, there were more volunteers that came), but we were happy to see our packed food being served, and I was told, even to the American soldiers. A couple of our teammates said that they saw some survivors eat their food without waiting for the utensils. They just dug in. They were that hungry. We were holding back our tears.

I believe everything that is being done in Villamor Airbase is great. Yes, they definitely need a better system, but I believe that all the services that are made available for the survivors — a nice welcome, food, water, relief goods, counselling, medical aid, haircut, massage, entertainment for the kids, a ride — is much appreciated. It’s after all about them, not about our convenience or glory, or whatever other wrong reason we may have in helping out.

Our experience volunteering last Wednesday made a great impact on us. Our hearts are filled with compassion for our people. In fact, some, if not all of us want to go back and volunteer again. Our hearts are full, grateful to God for what we have, grateful for the opportunity and ability to actually help, grateful to see so many other people, Filipinos and foreigners, giving so much of themselves.

Haiyan/ Yolanda may have devastated our country, but it has not destroyed us as a people. The Lord is still good and He loves the Philippines. He will restore and heal us.

The Lord is good to all;
he has compassion on all he has made. Psalm 145:9

Blessed is the nation whose God is the Lord,
the people he chose for his inheritance. Psalm 33:12

Big thanks to our team — Ninoy, Maeriz, Emma, Jan, Dwight, Clark, Elaine, Grace, Honey, Reg, Blanche, Mikko, and Minda! Thank you for your contributions in kind, in funds, in planning, timewise and effortwise. What generous hearts you all have. Thanks to some of your victory group mates who also contributed monetarily, to help us do what we set out to do. God bless them! Thanks Rej for giving us a connection. He was a big help. Thanks Kuya Orly for your jeep, and your effort to help us. Thanks Eileen for rewarding us with your yummy lava cake a week later.

Big thanks to Briann and Kim for helping us load, transport, and unload many of our sacks last Monday. It was unplanned, but thank God you were there and generously offered help.

Big thanks to Chris and our EGSI guys in church Raul, Bernard, Oliver and others, and our driver Victor for helping us with the goods we wanted to bring to Villamor Airbase. You guys always go above and beyond your duty. God bless you all!

*update: Schedules of shifts have changed apparently, and as far as we know, walk-in registration (but very early) is better than online registration (and we think there is no more online registration). Don’t be surprised if sudden changes occur in their system. Just be prepared to help and serve the survivors. This might go on a few more weeks. I really don’t know who to contact anymore, but these Facebook pages might be able to answer your questions — Oplan Hatid and Oplan Salubong (children’s activity area). 🙂

I am Phoebe Torres-Lucero, wife of a loving husband & dedicated pastor, King, and mother to three wonderful, smart, active little girls, Danae, Noelle and Gianna. Phoebe means bright and radiant. Torres means towers. Lucero means light. Put together, my name speaks of a tower of bright, radiant light. And that is what I hope to be as I write and share with you some of my experiences, especially on being a mom.
View all posts by Phoebe Torres-Lucero »