It was August 15 of last year when King had a herniated or slipped disc. He was hospitalized for 10 long days, the first 3 of which he could not stand or walk. The proxy orthopedic surgeon was honest with us about our options that physical therapy might help King, but his case already called for surgery. Aside from the disc being slipped and protruding, causing it and making it prone to hit a nerve, we were told that it was deteriorated. This meant therapy would help King’s spine cope, but it will not reverse the effects. Only through surgery, removing and replacing the disc with a titanium cage, was it going to get better.

I remember it clearly. The day he was brought back to the room from an MRI was the first time my kids and I saw King cry out in pain. The nurses were somehow not in sync as they tried to move King from the gurney to his bed. Danae cried for her dad. I couldn’t. My heart was heavy and my eyes were welling up, but I could not let the tears flow. I had to be strong for her and for King. (Noelle was 2, and not as empathic as Danae 🙂 )

I think I was scared then, but it was such a mixture of emotions that maybe I didn’t want to dwell too much on the awful

possibilities. I was too busy taking care of everybody anyway. There was too much to do.

We were so pleased when King started making progress by the 3rd day, wherein he slowly sat up. By the 4th day, he was able to sit up and walk ever so slowly. We were already leaning towards forgetting about surgery, because therapy was working really well for us.

On the 8th day, our orthopedic surgeon (not the proxy) came by to check on King. Without establishing a relationship with his patient first since he was out of town during our first week, he casually told King that he had no other option but surgery. When I excitedly said that King was already walking, he told me that “walking is easy. It’s going back to the normal things that’s going to be a problem.”

I was stunned. We had already gone from sadness at the thought of King no longer being able to do sports or carry his daughters, to being in faith, excited for God’s miracle. He was like the Grim Reaper, spreading hopelessness and despair. Or the likes of a Dr. Gloom, bringing clouds of darkness in our bright, happy room. I was just stunned. I barely said another word after that, but we told him that we were sticking with therapy. No to surgery. 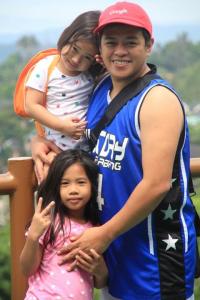 It’s been a year of King going back to the normal things he does, albeit more careful than before.

It’s been a year of no surgery, no additional therapy, and no recurrences.

It has been a year of healing, a year of God’s faithfulness in our lives.

“Because of the LORD’s great love we are not consumed, for his compassions never fail. They are new every morning; great is your faithfulness.” Lamentations 3:22-23

Please do read past posts about King’s slipped disc:

13 thoughts on “One Year of Healing”