So on the 12th, my actual birthday, we left the hotel early to drive 3 hours to Barangay Tan-awan, Oslob. We got

there, prepared our gear, and got on a small bangka (canoe-like boat with balancers on the sides) to go to the next resort to pay and attend the short briefing.

>We were told that touching of whale sharks is not allowed. There is a fine of 2,500 pesos if sharks are touched.

>Sun block poisons them, so we were told to rinse off if we had already applied some, which Danae did. Noelle was sure that she wasn’t swimming so she didn’t have to rinse.

>Splashing should be avoided because whale sharks tend to follow bubbles, thinking it means food, which one of them did because my cousin-in-law made too many bubbles while swimming. Haha that was scary.

>Boatmen are there to assist us in anything we need, which they did, even taking underwater videos for us.

>They only allot 30 minutes with the whale sharks, time beginning as soon as one is in view. They took us back to our resort afterwards. There are 4 or more resorts you can choose from as your take-off point. We chose the least glamorous one haha.

We paid 500 pesos per head for those swimming. Noelle was free. If you don’t swim with the sharks, you only need

to pay 300 pesos. Life vests are included in the fee, except for the girls’ which were really nice and snug. Those were 30 pesos each. Other gear including underwater cams are available for rent as well, but we brought our own. They also provided us an umbrella as the bangkas don’t have any shade. 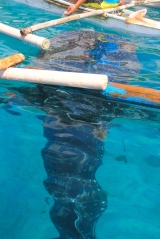 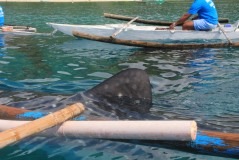 people. I think there were only about 3 other boats there. We were there at the right time, around 9AM. We were told that feeding of the sharks was only till 12PM. The sun wasn’t too hot, or at least we didn’t really burn even without sunblock.

We had food grilled in our resort, which we came back to eat after a trip to Tumalog Falls. The girls swam in the

murky water for a bit. That gave me some anxiety haha, thinking of what bacteria they might catch — I think I’ve turned into a bit of a germaphobe in the last few years. But I enjoyed seeing their happy faces and taking pictures. The kids got a kick out of riding a motorcycle back to the top. Walking down was so tough, we agreed to pay 30 pesos each to ride the habalhabal (motorcycle)! Only King and my cousin Dencee hiked all the way up, back to the van. 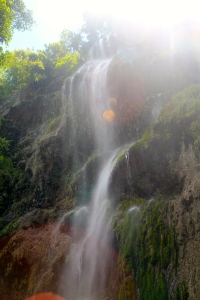 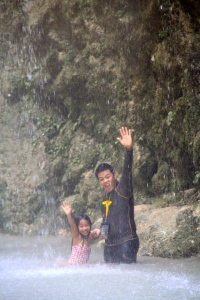 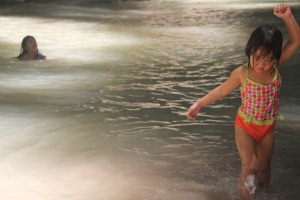 We headed back to Cebu City after lunch, but not before passing by Carcar for some

chicharon and locally made shoes, and Tabu-an market for dried fish and longganiza (sausages).

Click here to read about our first two days.