So we went to Cebu for my birthday! It was my second time to go.

My first time, in the summer of 2003, pre-King, was pretty memorable. We first went to Dumaguete to visit relatives at 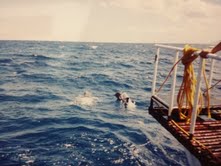 Silliman University. We also went to Bais to see dolphins and swim at this really nice white sand beach that disappears

at high tide. We took the ferry from Dumaguete to Bohol to join family friends next, see the sights, and go island hopping and snorkeling.

We then proceeded to Cebu so we could take the boat from Cebu to Cagayan de Oro, but due to some mishap, we had to stay overnight and take the plane instead. I only remember visiting Magellan’s Cross and the Taoist Temple, and my brother and I had fun hitting some balls at the nearby driving range with our dad. We even took a tricycle to and from the Waterfront h

otel. In Cagayan de Oro, I went river tubing, jumped off a 20-foot (or more) br

idge, hiked up a mountain and walked the canopy of some rainforest there. We went to Duka Beach Resort in Misamis Oriental for more snorkeling and canoeing sometime then. That was a packed vacation- definitely one of our many fun family memories!

This time, I went with King, the girls, and my mom. We

stayed 3 nights in Crown Regency Hotel, so we could do their Skywalk and tower-to-tower Zipline, which turned out to be a complete bust because it rained the night we wanted to do it. They apparently close it down when it rains. We found out the next morning that they didn’t open till 2PM, and our flight was at 3:50PM. Bummer.

Anyway, we arrived the night of the 10th, checked in, and ate at my mom’s favorite restaurant,

The Golden Cowrie. The one we went to, however, was the more “civilized” one since it was a new branch in the Ayala mall. They call it Hukad sa Golden Cowrie. Their food was good! Kare-kare, Blue Marlin, Sinigang na Hipon. Noelle and I especially liked their Chicharon Bulaklak haha!

The next day, we visited the Mactan Shrine and saw the Alegre guitar factory in Lapu-Lapu City. I found it pretty cool to be standing where our people fought with the Spaniards, where Lapu-lapu killed Magellan. I love that my girls learned some history.

The guitars at Alegre were beautiful! They use different kinds of wood to make their guitars, the most expensive of which is Maple wood. The ukelele I liked because of its dark wood, not that I play haha, costs 7,500 pesos. I guess it costs so much because it’s worth so much. My

mom bought a junior guitar which cost 2,300 pesos. Danae is again inspired to learn to play. She wanted to buy her own, and Noelle wanted to buy the pink one just ’cause. They’re both okay with borrowing my mom’s for now.

We had lunch at CnT to try some of their famous lechon. Their food was almost wiped out by the time it was our turn to order. Their lechon was soft, tasty, and believe it or not, not fatty! The skin was crunchy with no layer of fat underneath it. It was good with just their soy sauce mix. Puso (rice wrapped in banana leaves) is popular in Cebu.

The rest of the afternoon was uneventful, except for our visit to Kenneth Cobonpue’s showroom and

our purchase of some cool shirts at a souvenir shop. We did go to Magellan’s cross, Colon street, and the entrance of Fort San Pedro. We were tired and it started to rain hard, so we went back to the hotel without entering the Fort. The kids were excited to swim anyway.

Dinner was at Abuhan Restaurant. Their Pochero, which is Cebuano for Bulalo, was delicious!

Super soft beef and yummy bone marrow! Even their Beef with Cauliflower and Pancit Canton were yummy. We decided to sleep early because the 12th, my birthday, was Oslob day!

5 thoughts on “Cebu, the Second Time Around”