The Avengers was awesome! I loved each of the avengers, but Hulk was my 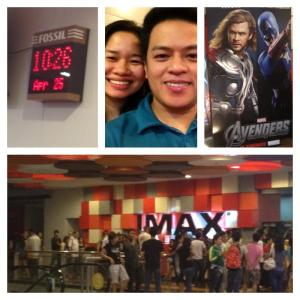 What happened yesterday was the usual — arguments, bickering, whining. As I started letting out a big sigh of frustration (not uncommon in our household either), I couldn’t stop myself as the sigh morphed into a loud roar. I actually thought right then that I sounded like Hulk. I’m pretty sure to my kids, I looked like him too. That’s one avenger I am not proud of becoming. Though I do not want to be “always angry,” I should be more like Dr. Banner, who knew how to control his anger.

Then I realized that I am many times cocky and proud just like Iron Man, thinking I know better or I know all. But I do think under all that ego, Tony Stark was able to think beyond himself and care about what was good for others. That’s what I hope I am to my children — doing what is best for them, not just for me. I do wish I had his brilliance and his money though haha.

Black widow is my girls’ favorite, though they didn’t watch the movie. Aside from her butt-kicking abilities, which I’m pretty sure I could do if called for such as when I need to defend my children (yeah right), she had this uncanny ability to read into a person’s thoughts. I am able to do that with my daughters too. I am able to draw out what is in their heart and mind by our conversations and the questions I ask them.

When it comes to my kids, I think I have a pretty keen eye like Hawkeye too. Sometimes I joke that I have eyes at the back of my head. They wonder how I know stuff that they thought I didn’t see, hear or notice.

The other day at the mall, I saw that I am like Thor and Noelle is like Thor’s hammer. Even though I let go of her hand and walk ahead of or behind her, I can be sure that her hand will find mine. Like a magnet. But more than that, Thor had an incredible love for his brother Loki, yet he chose to side with the good than with him. He helped save Earth, battling against his brother, but made sure that his brother didn’t die in the hands of humans or whoever those “things” were from another world. Moms are capable of this as well — unconditional love and tough love. I cannot be an enabler. I have to discipline my children because I love them.

Being a mom requires a lot of courage, which Captain America obviously had. He was somewhat old school, but sometimes old school is best — basics, foundations, values. He was a leader and he thought like a leader. He saw the big picture, devised a plan, and delegated so he could execute the plan. I am called to do the same many times, whether it’s fixing the kids’ schedules, teaching them, planning their party, or whatever. Sometimes I also experience resistance, wherein my kids probably want to ask me “why should we take orders from you?.” But I believe they see that we are capable of parenting them, not just because we’re stronger and more experienced, but because they know that we love them.

Mom-venger — all the avengers in one mom. Schizophrenic or cool? Haha, you decide. 🙂