Last month was Danae’s school’s parent-teacher conference and I was pretty excited to find out how well my daughter did. As I was waiting outside for my turn, I saw on the bulletin board the names of the top 3 students… the 3 kids who topped the kinder classes’ 1st achievement test. DANAE’S NAME WAS NOT THERE. I was assessing myself, how I felt about it. I was trying to be all okay with it, but the truth is, there was a pang of disappointment.

But before you judge me, hear me out! 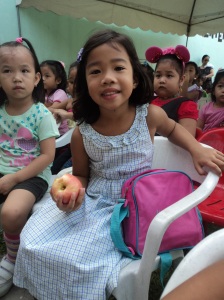 I felt a little disappointed that Danae didn’t rank, but I was not disappointed in Danae at all. I went from “aww sayang (too bad)” and “hmm, i wonder why?” to “well i’m sure she did great in her exams” and to “uh oh, i wonder what other issues the teacher will discuss with me!” Haha, when a woman is left alone with her thoughts, she goes from one extreme to the other! Well at least, that’s what happens to me sometimes. It was actually just my ego, my pride talking, because being on top of the class would prove that Danae is super smart. But actually, I don’t need to prove anything because she is! One conversation with her and you’ll already know. And there was no doubt that Danae knew her lessons. It was just a matter of correctly following the test instructions, and a matter of who scored more in the test. And what was really more important was Danae’s growth in terms of character.

I was happy to hear Teacher Grace tell me that Danae’s test scores were great. She was actually surprised that Danae didn’t rank. And instead of being disappointed, I had a good laugh because the reason for the 5-point pull on her grade in Writing was just the coloring part. She didn’t finish coloring the whole picture haha! And her mistakes in some tests were only due to carelessness, which is so true even when we do exercises at home. Yes, she did not rank, but she did exceptionally well nonetheless. Imagine being able to cope with her classmates and nearly perfecting all her tests even with her absences due to her health! And not only that, according to teacher, she is one of the students who needs the least supervision. How can I be disappointed? I AM SO PROUD OF HER!

Having no doubt that Danae is doing well academically, I asked two more important questions. One was if they did or if they will adjust Danae’s curriculum according to her capabilities. Teacher Grace told me that they are considering adjusting her curriculum in Reading already, since she’s somewhat ahead in that area. Then I also asked the teacher what she thought we should work on more with Danae. I was impressed by what she told me. Maybe she also believes that Danae is smart and has no problems with academics, but I think it’s more than that. She told me that we need to teach Danae to, in my words, respect others more — respect their space, respect their own decisions. Danae has a tendency to be bossy, forcing people to do what she wants, and gets upset when it doesn’t go her way (hahahaha, sounds so familiar). I am thankful that Teacher Grace knows what is important for our children — CHARACTER, 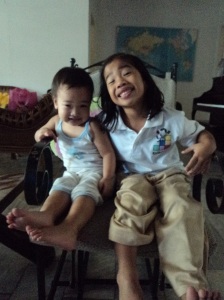 JUST AS MUCH AS OR EVEN MORE THAN SKILL. We are on the same page regarding this matter, and we can work together to help Danae grow and mature.

They have had their 2nd achievement test already and I don’t feel pressured anymore (because I do unconsciously put pressure on myself and sometimes Danae when it comes to her tests). I know that she did well, even considering 2 weeks worth of absences due to her week-long pneumonia-like symptoms and our week-long vacay. Whether she ranks or not, doesn’t matter that much anymore. Heck, it doesn’t even matter to Danae! So we really don’t bring up the subject of being an honor student. We just always tell her that she’s doing well, and she’s happy with that. But we do tell her about her attitude and character issues, so that she knows we are serious about disciplining her and teaching her to ultimately obey God. My kid is happy, secure, and confident. She’s naturally smart, active, assertive, and has a great personality. But she’s a kid. So, with necessary boundaries and much encouragement, we’re just letting her enjoy being one. She will eventually learn to up her standards and be excellent in everything she does, top of the class or not. 🙂