We just concluded our 3-day Every Nation 2010 World Conference at SMX last Saturday. What an awesome time, coming together from all over the world as one church, hearing the most inspiring testimonies, learning from the most diverse bunch of speakers ever, and worshiping God in our own ways and languages! Check out the article on Inquirer.

When registration opened, we were out of town, and we asked a friend to register for us, including the kids. It was not cheap, I tell you, but we knew it was best to bring them along. 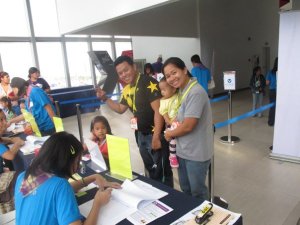 Aside from the fact that we didn’t have a choice on who to leave them with, I couldn’t also bear to leave them for 3 days. The most we’ve left them at home was for about 10 hours, 4 hours of which they spent sleeping. Anyway, going to the conference last Thursday, I was slightly nervous about leaving Danae in Children’s Church by herself. She’s almost 5 and quite independent, but I guess my protectiveness prevailed a bit over my confidence in my daughter. Kids Pastor and our friend, Larry Uy, said  I was more concerned than my daughter was. I kept expecting to see Danae’s name on the screen haha, as they might need me to get her, but Ptr Larry was absolutely right. Danae was perfectly fine in Children’s Church!  She was there for 4 hours on Thursday night and around 7 hours (not continuously) on Friday. She even told me she met new friends. Ptr Larry’s presence there made me even more at ease, too. I’m so proud of her! The problem came only when it was time to go home and she didn’t want to be separated from her cousins. She loves them so much and misses them since they don’t see each other often, that she’d cry every time. Having said that, I am so blessed by the wonderful fact that King’s family is also part of our spiritual family. My parents-in-law served as ushers at the event even. 🙂

So where was Noelle? With King and I, of course! She was manageable enough, except when she started making too much adorable noise or when she started pulling me to walk around outside. It was a riot having her around though. She had really really funny moments! She danced, made friends, charmed everyone’s pants off. Every time she saw a baby at the back or outside, she approached them, pulled her shirt up and showed her tummy for some reason haha. She didn’t stop eating her snacks. When one session was over, her favorite “Aris” (Tito Francis), took a piece from her stash and just held it, asking if it was okay with her for him to eat one. She responded by staring at first, then putting the rest of the cookies in her mouth and taking the one that was in Francis’ hand! Hahaha. She didn’t want to share at all. I saw many dedicated dads and moms alike, taking their kids up & down the escalator to entertain them when they got bored or restless. Noelle loved that escalator! It was a long and fun ride for her. When she got outside, she almost always refused to go back into the huge doors.

Truth be told, I missed some of the preachings and testimonies because I had to attend to Noelle, but thank God for my husband who did not mind doing diaper duty when needed! And because there were times that Noelle was occupied with the music, with eating, or coloring or writing (on the chair even — sorry!), and quietly distracting others hehe, I was able to sit through many of the sessions. I learned a lot, got encouraged and inspired a lot, and my faith got stirred up a lot!

The first 2 days with the kids, however, were extremely tiring for me. I slept tired and woke up tired, especially since on the first night we ate dinner in Makati  really late (MOA was closed & other restos nearby were full) and got home around 2am thanks to SLEX traffic. Poor Danae missed school the next day, which starts 7:30am, because she was also bushed. We let the girls sleep longer so they’d be ready for day 2 of EN2010. But as you can tell from the picture, by afternoon, during the break as we had our early dinner with a friend and delegate from Victory Cebu, Noelle was out cold! We actually decided from the first day that we’d leave them at home on the last day. We wanted the kids to rest and I wanted to rest too. My muscles were aching from carrying Noelle, I lacked sleep, and I just didn’t have the energy anymore. It was the right decision, although we missed them and talked about them constantly, because we were able to spend time alone and I was able to worship and listen without much distraction. And I’m sure the others around us were able to do the same haha, although they did miss Noelle’s presence too.

Looking back at EN07, I remember bringing Danae with us as well. She was 1 year and 8 months old then. This year, EN2010, Danae is 4 years and 8 months old, while Noelle is 1 year and 6 months old. It was definitely inconvenient, but I wouldn’t change the fact that we brought our kids. Even though they don’t actually listen to the preaching of the Word or sing praises to God (well, Danae does now), I believe something supernatural happens in their minds and hearts. We are starting them early, exposing them to the huge, world-wide spiritual family that we have, to praying and worshiping together, and to appreciate the beauty of our God that resonates through and transcends the diversity of His people. We are sowing God’s Word, sowing seeds of faith in our children. That alone makes it worth it! EN2013, God-willing, here we, the Luceros, come! 🙂